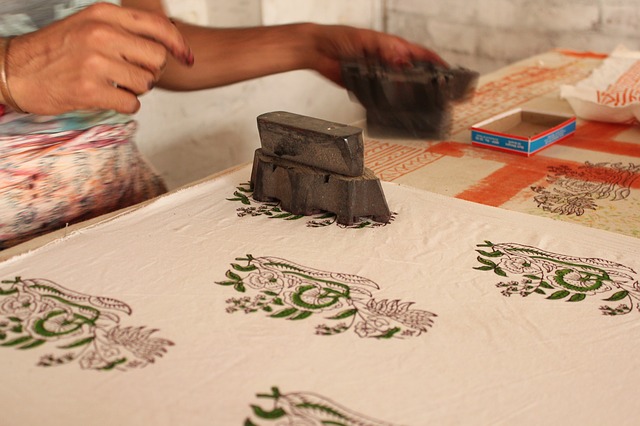 One of the ways India as a country expresses itself is through its rich and exquisite diversity of Textiles. It’s a blend of exceptional craftsmanship, creativity, magnificent colors and finest quality.

One of the techniques of creating beautiful textiles is the hand block printing. It is one of the oldest Indian craft forms in which artisans use wooden blocks for creating intricate patterns on the fabric. With craftsmen across the country expressing their personal stories through the craft we have multifarious prints to choose from. But there are few prints that have gained worldwide recognition.

Ajrakh is a block printed cloth with crimson red and indigo blue symmetrical patterns. The craft has its origin from Sindh (now in Pakistan). It was practiced by Khatri community artisans in Sindh who migrated to Kutch in Gujarat and Barmer in Rajasthan and continued the traditional craft there.
There are many stories related to the origin of the name “Äjrakh”.

The process involves many days and there are many layers of colors which are printed one after the other with a gap of time. The cloth has to stay for a day after every coat of color. That ‘one day’ gap period which is ‘Aaj ke din rakh’ in Hindi gave the technique its name ‘Ajrakh’.
The name ‘Ajrakh’ is also said to be derived from ‘Azarak’ meaning blue in Arabic and blue is the principal color of the printing.

The process is labor intensive and involves 14-16 stages of printing and dyeing. The fabric needs to be washed over and over again with various natural dyes and mordants such as harda, lime, indigo and camel dung. It is printed as single and double sided. The method is called resist printing which prevents absorption of a dye on the areas intended to be left uncolored.

Printing is done with wooden block which are hand carved with intricate symmetrical patterns, inspired from the architectural forms of Islamic intricate jaali windows and trefoil arches.

In order to keep pace with the changing market trends artisans are experimenting with newer motifs and designs. Many of the new products are developed like yardage, furnishings, scarves, stoles that are in great demand.

Dabu is an ancient mud resist hand block printing of Rajasthan. It is believed that this art form was introduced 450 years back by the Chippa community who migrated to Bagru. Chippa which means community who stamps or print works together by the riverside. The bank of the river provided them with clay which is an important ingredient of the printing process. Now the community have spread across Rajasthan. Akola is one of the main clusters for the printing.

The name ‘Dabu’ is derived from the word ‘Dabaana’ which means to press.

The process of printing is complex and requires multiple stages of printing, washing and dyeing. First the plain fabric is washed to remove the impurities which may interfere with the dyeing process. Then, designs are printed on the fabric using wooden blocks. The motifs are inspired from nature and surrounding elements which are carved on the wooden blocks.

The next step involves making the mud paste which is crucial and a unique element of the entire process. It is a viscous paste of mud, gum, lime and waste chaff which is patted over certain parts of the design and is dried with sprinkled sawdust.
After this process the fabric is dried under sun. The fabric is sometimes dyed more than once in different colors to give each part of the design a different hue.

Today the craft form is gaining importance as the world is rising up for the environmental awareness.

At a distance of 30-35 kms from Jaipur, there lies a small village called ‘Bagru’ which is not popular for any palace or fort but for keeping alive the three centuries old tradition of printing with natural colors and wooden blocks known as ‘Bagru printing’.

The history of the craft is same as Dabu print. It was started by the Chippa community in Bagru, Rajasthan. The thing which makes Bagru print different from Dabu print is the process. Bagru print is direct hand block printing style which is done using natural colors.  The craft form has got its name from the place ‘Bagru’.

The process starts with washing plain fabric to remove the impurities for good penetration of the colors. Then the fabric is prepared for ‘Harda’ treatment. Harda is a seed which is the most important element of the printing process. The seed is powdered and mix with the water. The fabric is washed with this mixture to give it a yellow tint. Harda has natural Tanic acid in it that acts as a mordant for the iron of the printing colour and resulting in formation of Bagru black.

The same treatment is given to fabric using madder for red color, indigo for blue color, dried flowers of Dhabaria tree and turmeric for yellow color. This treatment is not given in the process of Sanganer printing as it is always done on white background. The treated fabrics are then squeezed to dry and laid down in the sun.

Sanganer prints are known for delicate floral and leaf motifs. Bagru prints use these natural designs, but also incorporate geometric shapes such as waves, checks, and jaali patterns which have been adapted from Islamic architecture.

Bagh is small town in Dhar district of Madhya Pradesh. Known for its Bagh caves, the town is also associated with the craft form of fabric printing called Bagh which is also a key source of livelihood for the people of the region.

The craft has its roots in Sindh (now Pakistan). The artisans from Sindh were migrated to Marwar in Rajasthan and Manavar In Madhya Pradesh and later in 1962 to Bagh district. The style of Bagh printing has evolved since then.

Carried out by a huge workforce in the town, Bagh printing is all done manually, involving several processes of repeated washing, dyeing, and printing. In the first step, the fabric is soaked overnight in water to get rid of shrinkage, then dried in the sun for hours. The fabric is then soaked in a mixture of castor oil, goat dung, raw salt and water, processed by walking on it constantly. Then the cloth is washed with water. All these steps are repeated thrice to get completely rid of impurities and starch. Later, the fabric is drenched and dyed in a mixture of harad and water in order to form a base for printing.
The (dye tray) is set with seven layers of jute, which work like a dye pad for designing. After printing, the fabric is dried in the sun for 10-15 days and then washed in flowing water.

In the next step, the fabric with the mixture of floral and leaf extracts is boiled in a copper vessel. This allows shine and colors to finally develop and appear.
Some of the wooden blocks which are still being used are around three-hundred years old. The designs are inspired by nature, wildlife, architecture and the ancient Bagh Cave paintings.

Traditionally, this printing style was used for products such as lehengas and sarees, whereas now it has innovated and expanded its range to bed covers, dupattas, curtains, table cloths and much more.

Kalamkari is one of the most traditional and oldest craft forms of India. In ancient times people used to travel from a place to another to tell stories through plays, dance, music, some of them used to draw on canvas. This is how the craft of kalamkari was born. The name Kalamkari literally mean Pen (Kalam) Craftmanship (Kari). The artists use bamboo stick as pen and cotton fabric as canvas for drawing.

Srikalahasti is the art of painting on fabric while Machilipatnam is art of wooden hand block printing on fabric.
Owing to the Muslim rule in Machilipatnam, the Kalamkari art was inspired by the Mughal and Persian motifs. The process of this style of Kalamkari is slow and labor intensive. The cotton fabric is washed to remove the impurities and soaked in buffalo milk mixed with myrobalan fruit dust. After drying printing is done using wooden block using indigo, dust of ripe myrobalan fruit for yellow color and so on. The fabric is then finally washed and sun dried.

The craft form had a major setback in 1950, but was revived with the efforts of Government and artisans. Now it is not only restricted to paintings but have emerged as fashion attires, home furnishings products and much more.

About the Author: Juhi Lakhwani is a Textile Designer and Naropa Fellowship Scholar, currently dedicated towards making a meaningful impact in the Ladakh and Himalyan region.