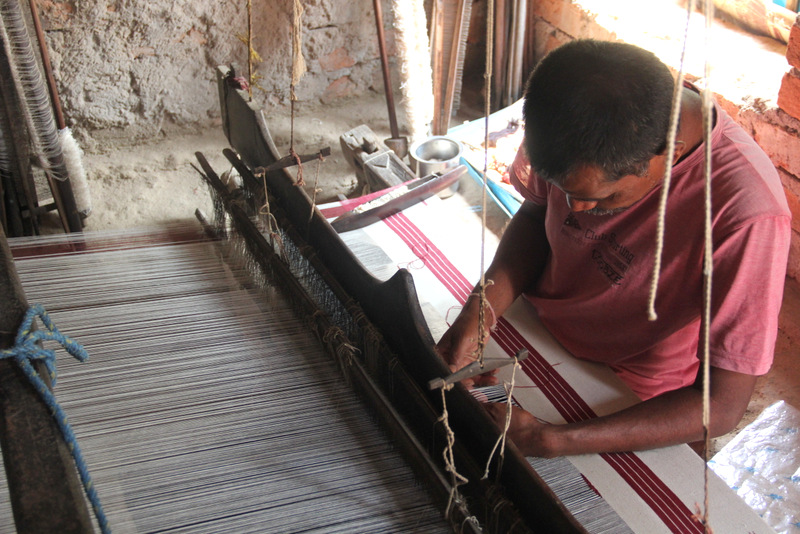 We’re celebrating National Handloom Week – and there is  no better time to acknowledge and appreciate and support our 500 Seller Partners who work closely with over 60,000 Weavers – and showcase 60+ unique weaves on our platform, impacting over 100,000 lives.

They bring to us creativity in design, immensely skillful hands and mathematical genius all together to create designs using colours, yarns, weaves, care, and focus – in a manner that can be only described as magical. Making each piece that’s been handwoven almost surreal in its appearance, feel, and drape.

We’re proud to present a carefully curated selection of our best waves. Explore. Learn. And be delighted.

The Baluchari weave came into existence about 500 years ago in a small village called Baluchar in Murshidabad district of West Bengal. The word “Baluchari” literally means – river bank – referencing the fact that the village was situated on the banks of the Bhagirati river. Known for its depiction of visuals of the Ramayana and Mahabharata – the Baluchari saree is now woven in Bishnupur and has been granted the status of Geographical Indication for West Bengal in India.

It is said that Banaras was old when the Buddha was young. As one of India’s oldest settlements – it has been known for its silk brocade weaves – also called Banarasi. Originally woven to adorn royalty using real gold and silver thread – it is said that Gujarati silk weavers migrated to Kashi (as it was known then) in the seventeenth century after the famine of 1603. They practised their skill and turned it into art – which began to flourish during the Mughal period. Weavers in Banaras have secured Geographical Indication (GI) rights for ‘Banaras Brocades and Sarees which are now an integral part of any Indian bridal trousseau.

The name Jamdani is of Persian origin wherein “jam” means flower and “dani” means a vase. The name is suggestive of the beautiful floral motifs that adorn these gorgeous sarees. Originally used as a dress material for men and women – today the Jamdani is woven in saree lengths  – using a huge variety of motifs. The Bengali version of the Jamdani is called Dhakai due to the place of its origin — Dhaka in Bangladesh. Also woven on the looms of Varanasi – Jamdani weaving is somewhat like tapestry work, where small shuttles of coloured, gold or silver threads are passed through the weft.

The timeless Chanderi – be it in the form of a saree, or fabric or a wrap now has a special place in our hearts. The weave is from a small town of the same name in Ashok Nagar district of Madhya Pradesh and was once used to dress royalty. Local folk say that Chanderi is so light – that it can be described as “ bunni hui hawa ” or woven air ! Known for its lovely and lightweight fall, buttery feel and subtle sheen – Chanderi is perfect for India’s warm and tropical climate.

A small town in Hooghly district of West Bengal – Begampur is known for its light-weight cotton Begampuri sarees. Handwoven with contrasting borders in a variety of colours using techniques such as ‘maathapaar’ or ‘beluaaripaar’  – these sarees are identified by their contrasting borders which often have figured motifs.

The Maheshwari weave originated in the town of Maheshwar in Madhya Pradesh in the 18th century – where craftsmen wove varied designs including stripes, checks, and floral borders in pure silk with zari and brocade to craft uniquely beautiful sarees. The art flourished under the royal patronage of Queen Ahilyabai Holkar – who would gift Maheshwari sarees to royal visitors and guests. Own a piece of our craft heritage.

Handwoven by the Dongria Kondh tribe who live in the Niyamgiri Hills of Orissa – Dongria sarees are woven in thick but pure, soft cotton fabric in vivid colours. Traditional motifs used in the Dongria weave include geometric patterns and depictions of temples and nature. Explore this relatively lesser-known handloom weave with us and support our tribal artisans.

Today we invite you to take your pick from handloom weaves used to craft more than 40,000 products across stylish contemporary apparel, home décor, and lifestyle products. Come – celebrate our Handloom Heritage with us !