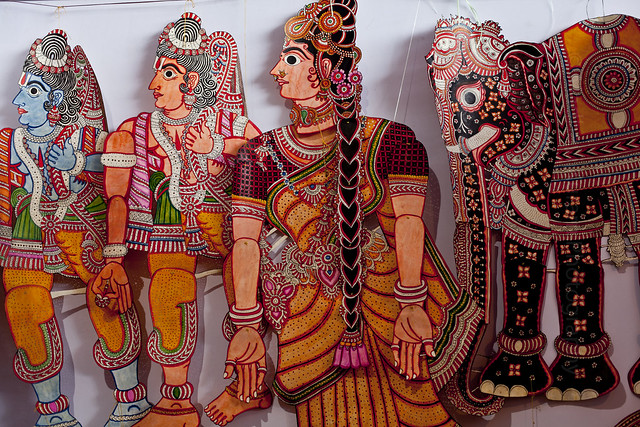 India has a rich culture and a diverse heritage. Every state also has its own legacy – of art and craft that are linked back to the lives of their ancestors. One such art form from Andhra Pradesh is Tholu Bommalata Art.

In ancient times – the performers of this art were part of a group of wanderers and peddlers who travelled to different villages month after month, year after year. The performers offered to entertain their audience by singing folk tales and narrating stories from epics and legends, telling fortunes, selling amulets, performing acrobatics, charming snakes, and mending pots. This performance was their source of livelihood, and a form of traditional storytelling.

The leather puppets were the highlight of the story. The movements of the puppets matched with an instrument playing in the background. Mostly, music from a harmonium and a mridangam accompanied the spoken and sung narrative. The performances were immersive and meaningful – with words taken from Telugu and Sanskrit literature – honouring our history and our culture.

Leather puppets formed a significant part of the art and craft of Andhra Pradesh. The custom of using them is believed to have originated in 200 BC during the rule of the Satavahana dynasty. This ancient tradition provided knowledge of Hindu epics- the Ramayana and Mahabharata, blending them with local customs, social issues, and passing culture and tradition from one generation to another – keeping this form alive when radio, film, and TV did not exist.

These puppets were also a symbol of the value of the art form. They were often used as souvenirs – stored for respect and remembrance. The original puppets were made from dried hides. The color scheme, style, and decorative elements were heavily influenced by the aesthetics of the 16th-century Lepakshi temple in the Anantapur district of Andhra Pradesh.

Nimmalakunta, a small village in Dharmavaram Mandal, is known for this art. There are many puppetry artists from this village that have garnered applause and recognition. A 78-year old veteran, Mr. Dalavai Chalapati Rao is one such artist. He has won several awards, and is lovingly known as  “the best leather puppet maker”.

Sadly, today Tholu Bommalata is only rarely performed at village fairs and is on the verge of extinction. It has now been replaced by films and television, which have reanimated Hindu epics for the digital era.

Artisans today are taking up other means of livelihood – using Tholu Bommalata motifs  to design and make paintings, wall hangings and small leather puppets to keep the art form alive in our homes. Tholu Bommalata Art is now a part of our home decor. These decor products are vibrant, intricately designed – conveying stories and symbols and making the perfect conversation starters.

How we support Tholu Bommalata Art

World Art Community is proud to support this rare art and craft.

We currently stock more than 50 designs in Tholu Bommalata across various categories, from decor to kitchen essentials. These include lampshades, wall frames, candle holders, earrings, serving trays, and more. They are intricately designed and painstakingly created by the custodians of the art form.

As we’re doing our bit to sustain this rare craft of visual story-telling – we invite you to support artisans and craftspersons who are preserving this tradition – for our future generations.