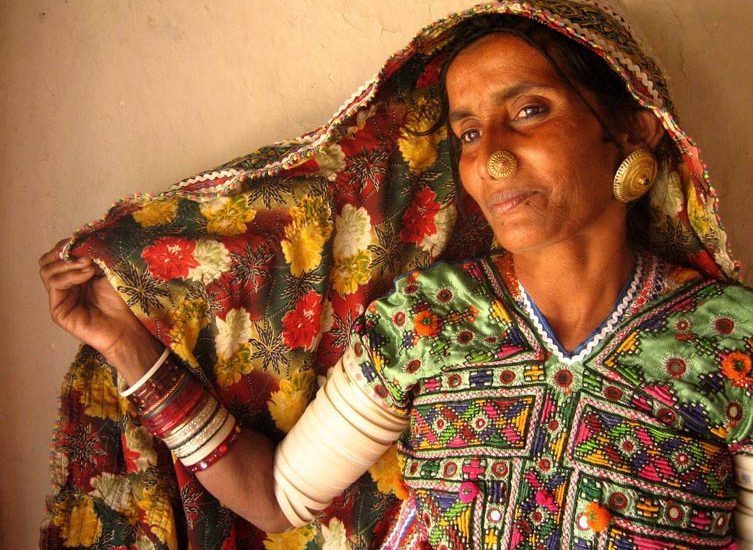 One of the most distinctive and easily identifiable craft styles of India – Kutch work or Kachchhi embroidery derives its name from the source of its origin – the Kutch region of Gujarat. It is characterised by its use of bright colours, mirrors and beads and intricate and extensive embroidery that embellishes the entire fabric on which it is based.

Usually crafted on cotton or silk fabric, Kutch work embroidery is done with silk or woollen thread using fine stitches to create detailed and elaborate patterns. Motifs and designs draw inspiration from romantic, architectural and human motifs, as well as Persian and Mughal art. The colours used are mainly green, indigo, deep red, black, yellow and ivory. The embroidery is further embellished with its use of mirrors, shells and beads, which are placed strategically in between or around the patterns. Mirrors or abhla are an inherent part of many embroidery styles in Kutch, making the fabrics glisten and shine. The mirrors are believed to represent water – as its importance in such a dry region cannot be denied. It is also believed to be useful in warding off the evil eye. It is also possible that the use of mirror work in Kutch embroidery has its roots in Islamic art and architecture.

History traces the origin of Kutch work embroidery back to ‘mochis’, the community of shoemakers, who also used to work on royal textiles and decorative objects. It is also believed that this unique style of embroidery was brought about by Kathi cattle breeders, a group of wanderers associated with Karna of the Mahabharat. Over time – their work evolved to and they began to produce the fine needlework that characterises Kutch embroidery – as it displays a variety of patterns, moods and themes.

Kutch work embroidery has different varieties, styles, motifs and colours that vary from community to community and region to region. Different types of embroidery are not just decorative in nature but also speak of specific details about the makers’ and wearer’s caste, social status and religious affiliation.

Young girls are taught Kutch embroidery by their mothers at an early age, and the art is passed down from generation to generation. A young girl’s skill at embroidery can even help her to find a good match in marriage !

Embroidery is done mainly by herding and farming communities, such as the Rabaris, Ahir and Soda Rajputs, who traditionally produce these hand embroidered products for their own use.

Over the years, various clans around the region have appropriated the essential features of Kutch embroidery to create distinctive styles of their own, such as Rabari, Ahir, Mochi and Mutwa.

Embroidery is an important part of a Rabari woman’s life, as we can see in the work visible in various important garments such as the choli, shawls and skirts, which are elaborately embroidered for ceremonial wear.

Mirrors are used in various shapes and sizes and abstracted forms of scorpions, peacocks and parrots as well as flowers and geometric patterns are embroidered in chain stitch and accent stitches in bold colours.

The Mutwa Muslim community live in various parts of the Banni region of Kutch.

Their embroidery is extremely intricate and their designs are mainly geometric,  characterised by fine stitches in bright, and sometimes metallic thread on silk or satin.

The embroidery of the Ahir clan is distinguished by the chain stitch that outlines the design and herringbone stitch which is used to fill them in.

Designs are influenced by the embroiderers’ surroundings and motifs include flowers, scorpions, peacocks, parrots, elephants and milkmaids. Mirrors, abhla are regularly incorporated into the designs.

Mochi / Ari embroidery was created for furnishings and hangings used in the royal courts of India from the early seventeenth until the nineteenth century.

The embroideries were typically worked in chain stitch using coloured floss on a white fabric stretched on a wooden frame. As with other art forms, Kutch embroidery has evolved with the times.

While the craft was originally was essentially seen on garments – it today finds application across a a wide variety of artefacts including bags, jackets, footwear, accessories and even jewellery !

At WorldArtCommunity – we are delighted and proud to support and encourage our artistic partners who are working with artisans and craft communities to create fresh and contemporary expressions using the craft of Kutch Embroidery. Choose from distinctive looking jewellery, stoles, apparel, boots, mojris, accessories and more. All handcrafted with the exquisite beauty of Kutch Embroidery !