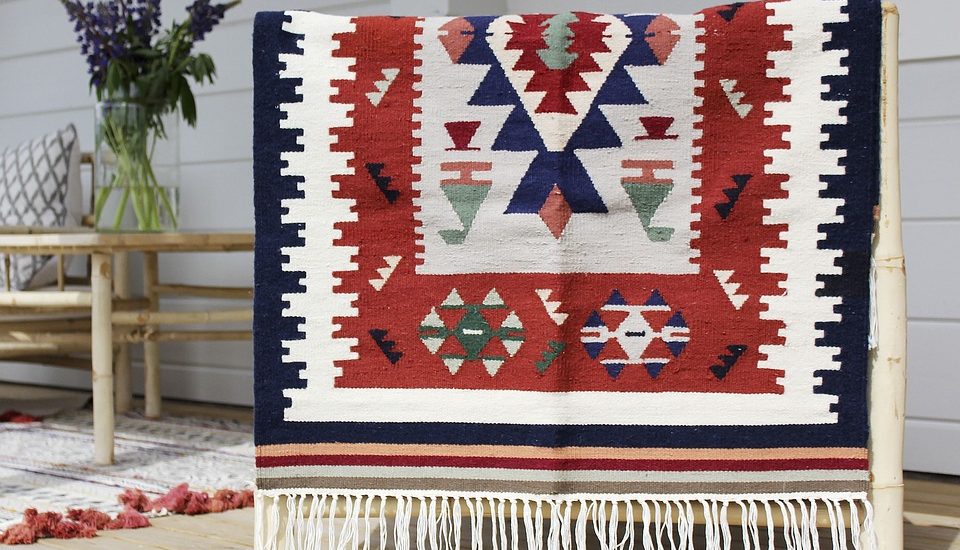 A kilim is a flat weave  tapestry – woven carpet or rug traditionally crafted in and around the countries of Central Asia such as Iran, Azerbaijan, Turkey.  A kilim can be purely decorative or can function as a prayer rug. In today’s day and age – kilims are popular as floor-coverings in contemporary households.

The term ‘kilim’ originates from the Persian word – gelīm , where its literal meaning is ‘to spread roughly’.

“Kilim” is the Turkish word for weft-faced tapestry, the simplest weaving stricture known. It consists of vertical warps combined with successive passes of horizontal wefting.  It more precisely refers to rugs woven in slit tapestry weave made in the traditional rug producing areas of the Middle East.

Like pile carpets, kilim have been produced since ancient times. The explorer Mark Aurel Stein found kilims dating to at least the fourth or fifth century CE in Hotan, China.

The Kilim weave is an interesting and unique craft . Kilims remain enormously popular till this day, attracting lovers of finely crafted weaves with their eternal weaves and fascinating history. And while the process of creating a kilim weave is a distinct process, woven kilim  fabric can be used to craft home accents, accessories and more. Kilims are produced by tightly interweaving warp and weft strands to produce a flat, woven surface with no pile.

Kilims remain enormously popular till this day, attracting lovers of finely crafted products with their eternal weaves and fascinating history. And while the process of creating a kilim weave is a distinct one, woven kilim  fabric can be used to craft home accents, accessories and more.

Kilim weaves are thus tapestry weaves, technically weft-faced plain weaves, that is, the horizontal weft strands are pulled tightly downward so that they hide the vertical warp strands. If the wefting is compressed vertically with a weavers comb so as to cover the warps entirely, it produces ‘ weft-faced ’ tapestry. By manipulating the wefts in different colours, they can be made to produce the design of the kilim weave.

As they have gained popularity historians, art-lovers and rug sellers have begun to analyse the various motifs and designs woven into kilim rugs in order to decipher their language. While researchers proposed multiple theories about the origins and evolution of these symbols, the subject has perhaps as proved elusive.

This lack of clarity has not prevented scholars from pursuing the subject further, nor has it prevented sellers from coming up with appealing tales about the meanings of these various symbols. Explore our varied craft expressions using kilim rugs and fabric by our artistic designers and craftspersons.

Bring home a piece of tradition.