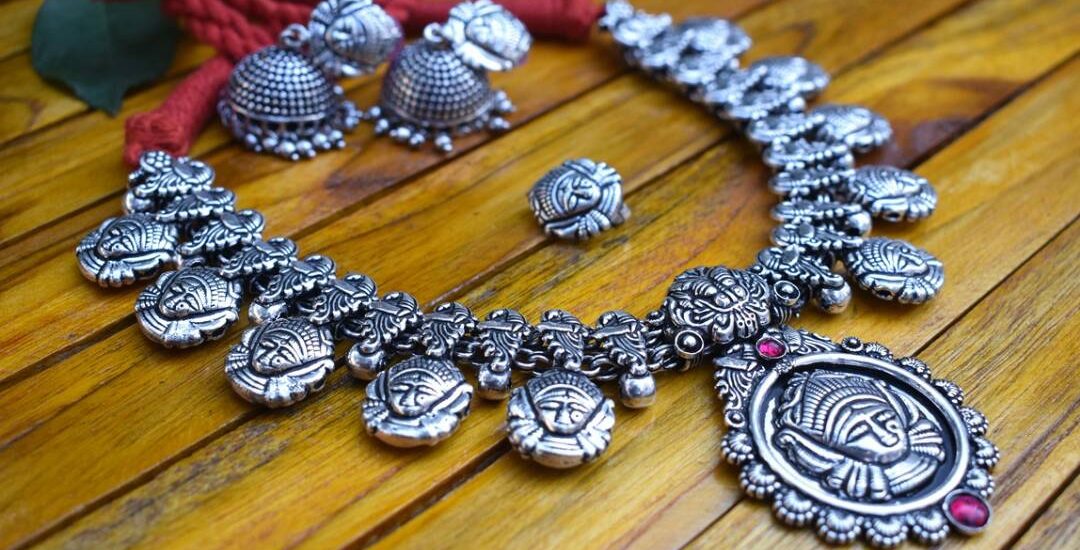 The timeless and classic allure of Temple Jewellery – has over time been an intrinsic part of a woman’s jewelry box – especially in the Southern part of India. Inspired by historic architecture, paintings and statues of temples, gods and goddesses, South Indian Temple Jewellery is traditionally made of gold and embedded with precious gems and stones. Known to be one of the most beautiful and artistic forms of ethnic Indian jewellery – it has adorned gods and goddesses, royalty, dancers and ordinary women and men down the ages.

Temple Jewellery consists of chunky and heavy bangles, earrings, necklaces, nose rings, anklets, armlets, head adornments and waist belts that are no less beautiful for their size and weight.

The History of Temple Jewellery

Temple Jewelry is believed to have its roots in the 9th century AD – during the reign of the Chola and Pandya dynasties. Originally – Temple Jewellery was handcrafted out of donations of gold and other precious metals and gems that were offered at the temples located in South India. The jewellery was then made for adorning temple deities and members of royal families.

It is also believed that in order to protect their jewellery, kings offered it at their temples for adorning the deities. The Chola, Pandya, and the Krishna Deva Raya dynasties that ruled South India between the 9th century and 16th centuries AD, were connoisseurs of Temple Jewellery who encouraged skilled craftsmen and supported jewellery workshops attached to the temples.

Despite the influence of the Mughals and the subsequent British rule – Temple Jewelry retained its original form and continues to do so even today. One can still see exquisite specimens of Temple Jewellery adorning the figures of gods and goddesses at various temples – especially on festive occasions.

Over time, Temple Jewellery came to be associated with auspicious moments and religious occasions and is now an essential part of every South Indian bride’s trousseau. Even today jewellers – use traditional designs and motifs which are still known by their original names – such as tamarappu (lotus flower), kokku (crane), makara (crocodile) etc. Temple Jewellery is worn on auspicious occasions and festivals as it is believed to bring good luck.

Earlier Temple Jewellery was handcrafted to perfection. Artisans would find inspiration from the many temples in south India—the sculptures, illustrations and carvings were beautifully replicated in their work. Today – the use of machines has reduced the time taken to craft these pieces.

While Temple Jewellery was traditionally crafted in gold; during modern times – it is also crafted in silver with gold polish and embedded with semi-precious stones – making it affordable and accessible. The North Indian influence can be seen in the use of polki and kundan work.

Temple Jewellery by virtue of its heritage and design – is believed to invoke a divine presence every time a piece is worn. And hence – it is a must for brides who seek to add an auspicious and timeless element of tradition on the most special day in their lives. Temple Jewellery often is also a traditional foil to a contemporary ensemble.

Given the demand and popularity of Temple Jewellery – it promises to be an investment as well as deeply cherished possession for its owners – with the promise of its craft heritage and workmanship.